What are they? Crinoids (Pronounced CRY-noids) are animals that live in the ocean and, like their cousins, the starfish, have fivefold symmetry. In the juvenile form they swim around, and then in adult form if they have stalks, they will attach themselves to the ocean and only move if disturbed.

If the adult forms do not have stalks, they will stay mobile in the water column the rest of their lives.  The adults who do have stalks are known as sea lilies, while the mobile ones are known as feather stars.

They live as deep as 30,000 feet under the surface of the ocean.  The water pressure at thirty thousand feet is a whopping 13,000 ft per square inch.  That’s a lotta pressure.

The crinoids we’re concerned with are the ones preserved in the fossil record.

When did they appear on the planet?  There was a strongly suspected ancestor of the crinoids in the burgess shale deposit of Canada, which would make the lineage about 508 million years old.

However, around 485 million years ago the unmistakable proof of crinoids definitely arrived on the scene, leaving the fossils we find today. 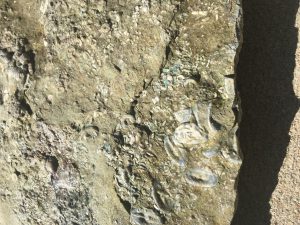 The Mississippian fossil record has an abundance of crinoids, however nowadays they are comparatively rare.  The longest crinoid fossil stalk ever discovered was 130 ft long.

Within the two major types of crinoid, the sea lily and the feather star, there are approximately 35 different families left in existence.

Crinoids are the state fossil in Missouri and are the proposed state fossil in Indiana.  Both states are good places to watch for them, as well as any state along the major rivers of the American Mid-west, including the Mississippi, Missouri, Osage, and Tennessee, among others.